Madame Marissa does not appreciate being made to wait. And that is what this loser did. She had to make him pay for it because her time is valuable. She made the loser lick the soles of her dirty shoes before she trampled him with those same high heels. She then bundled him into the trunk of the car and sped off with him there. She did not even pay for the ride.

Mistresses torture secret out of slave

Lady Karame knows that this guy has a secret. And she wanted it. So she called her friend and they had fun extracting it. They did not need to use the secret for the next few hours so they took their time to humiliate and torture him. They made him smell their stinky feet and trampled his face with the same smelly feet. They tortured him until he gave them what they wanted.

Mistress punishes guy for stalking her

When this mistress found out that this loser had been stalking her, she decided to put an end to it. She called him and spoke to him but instead of stopping, he tried to make his ways untraceable. But the mistress found out again and this time, she called him and when he came, it was not to talk but to get some punishment. She humiliated him and degraded him using foot fetish but told him that the next time would be brutal.

This mistress and her friend found out that this guy beats up his wife. They did not want to call the cops because there was nothing to link him to it and his terrified wife would not snitch on him. So they decided to humiliate him and they did it perfectly. They made him do disgusting things like suck their smelly and stinky toes and slapped him using their feet. They forbade him from ever touching her or there will be hell to pay.

Madame Marissa was bored at home and her only source of entertainment was her slave. She did not feel like watching TV or surfing the internet. She did not feel like going out as well and the only thing that remained was humiliating her slave for fun. And that is what she did. She made her slave lie down and she used her high heels to trample him. She then made him suck her toes.

This mistress found out that her slave was stealing from her and she had to take drastic measures. She went to the stable and covered her boots with horse shit. She then went to the house where she made her slave lick the shit from her boots. As if that was not enough. She also trampled her slave using those same boots and made sure he was not only in pain, but also covered in shit.

Sandra has a lot of beautiful shoes, but she's very cross because all of them are dirty and not to her high standards of cleanliness. The best way to clean them is to summon her worshipful footboy. She makes him get on the floor and clean each and every shoe with his mouth and tongue while verbally taunting and abusing the poor loser. What a bitch! 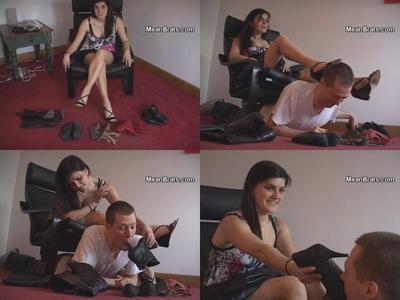 Even a demanding mistress likes a bit of fun. Esther is only 18, but she's already acquired the need to have her big feet worshiped and licked by pretty female slaves. She sticks her big soles right in friend Rosie's pretty face, having her lick and suck her big feet while giggling happily to please her new mistress. Loving and light-hearted foot worship session with goddesses.

Presley has a sick and deviant sense of humor, and what better way to express herself than to torture her hapless footboy slave? He knows her socks and feet are filthy and smelly inside the confines of her hot boots, and her feet have been sweating like mad all day. She frees her smelly feet from the confines of her boots and rubs them hard in her slave's face.

Rosie has just put in a grueling workout, and is fairly cranky already. Her irritation is amplified when she finds her lazy female foot slave lazing on the sofa. As punishment, her foot slave must lick every inch and sweaty crevice of her mistress's sweaty and stinky feet, swallowing her sweat and filth on command. Rosie is hard to please and insists upon perfection from slave.