All articles tagged with "Sweaty Feet"

Mistress dominates guy for conning her

This mistress did not appreciate being conned and she had to punish this guy and teach him a lesson he had never been taught before. The mistress used her high heels to trample him and kick him as hard as she could. He was in pain and as he felt pain, he knew he had messed up and he had to make up for what he did. He returned all he had taken from her.

Buy this video at Yezzclips.com now!

Lady Scarlet believes that it is important to punish people when they have made a mistake because that is when they will realize their mistake and change. She did not want this slave to get used to pissing her off so she used her foot worship to punish him. He was turned into a foot slave and had to lick her feet and be trampled as well. He learned his lesson.

Mistress Saida is the kind of girl who likes to humiliate for the sake of it. And her friends mistress Kennya and mistress Sanders wanted to learn how to do it as it looked like it was fun. So they came with a loser who needed to be humiliated and mistress Saida showed them how it was done. The guy was first of all stripped naked and then asked to do some humiliating things with the threat of trampling him with heels hanging over him.

Mistresses Domi and Kimi wanted a slave and they had interviews. This guy impressed them during the oral stage but it was now the practical stage and they wanted to find out whether he would still wow them. So the mistresses chose to trample the shit out of him and also make him lick their soles. He understood the gravity of the situation and he behaved accordingly like they wanted.

Mistress Tiffany was interested in humiliating as well as dominating this loser and she did it in a way he never expected. The mistress cruelly used her boots to dominate him by forcing him to lick her soles. He did not have an alternative as she had tied him up and she had spat on him besides promising more cruel things if he did not lick the soles of her boots.

When this mistress felt that her slave was not understanding what she told him, she knew she had to come up with a different way of doing things so that she could get her message across. And she did it by using her foot worship fetish. The mistress cruelly used her heels to trample him and also ass crushed his head. She made sure he understood her without saying a word.

Lady Zoey could stand a lot of things from her slave but not disobedience. She was not going to let him get away with it and she had to nip it in the bud. So she used her foot worship fetish to do it. She crushed his head with her feet and she had him lick and smell her socks to further humiliate him. So he felt pain and humiliation but she did not care. 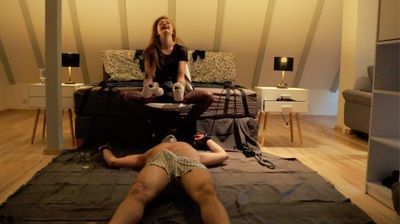 This Russian mistress wanted her feet licked and she was sure that if she asked this guy to do it, he would not do it. So she came up with a way to make sure he did. She scared the shit out of him with slaps both using her hands and her feet so that he would do whatever she asked him. The plan worked and she had a great time at his expense.

Mistress Dana has an ass that is out of this world. She loves to use it to dominate guys for her own enjoyment. She is one of the few mistresses who do not humiliate guys because they are pissed but rather because they love to do it and have a fetish for it. Today she teased this guy and when he took the bait, she cruelly used her high heels to dominate him.

Mistress Lilly had asked her foot slave to do something but he had done it poorly. So she used her feet to dominate him but she felt that was not enough. The mistress resorted to slapping the shit out of him and she also made him open his mouth and swallow her saliva. He had no choice but to do that. It was a lot of fun for her but a nightmare for him.