All articles tagged with "Dirty Soles"

Madame Marissa likes to humiliate guys for fun. She has a foot worship fetish and it is her go to method of slave punishment. So she humiliated this loser by making him lick her hunter boots. They were dirty and they were smelly but he had no choice but to lick and smell them. She also had him lick the mud that was on the soles before she let him go.

Mistresses enjoy getting their feet smelled

Mistress Ava and her friend love to try new things and today they were trying foot worship. The mistresses enjoyed themselves as they got their feet licked as well as their toes sucked. The mistresses used flirting and seduction to get the guy to do it. He thought he was going to turn them on but they were not turned on. They were just having fun at his expense, something he found out much later.

Mistress Gaia caught her slave and his bitch having sex in her house. She was pissed and she punished both of them. She did not want that mistake to be made again so she degraded them using her bare feet. She made sure her feet were dirty and smelly and she inserted them into their mouths. She had them tied up so that they could not try to resist what she was doing to them.

Mistress Serena was angry at her slave. She had caught her slave doing things she did not approve of and she had to punish him. She did this by trampling him with her bare feet. She crushed his face and she tortured him badly. She had fun as she humiliated him and she knew that her slave had learned his lesson and he would not piss her off at any time again.

This mistress was excited about redeeming her win. She had a bet with her boyfriend and since she had won, she had to make him do something crazy so she decided to make him lick her flip flops as well as her feet. He was shocked that she wanted him to lick that but he did not have a choice and had to lick both of them. She laughed as she watched him do that. 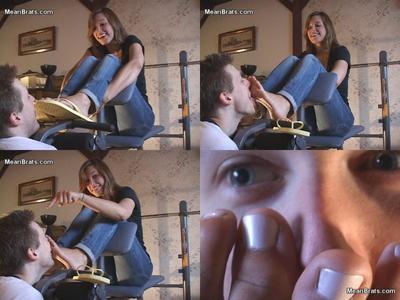 This mistress knew that her shoes smelled. They were stinking so bad that she could not stand them herself. But she was determined to use them to humiliate and degrade her slave. She called him to where she was and she made him lick her feet, her socks as well as her boots. She nearly choked him as he could not breathe properly with all that smell on his mouth and nose.

Madame Svea likes her high heels because she does multiple things with them. She can wear them and look gorgeous but she can also wear them and use them as a weapon or a tool of punishment. She loves to crush and torture slaves with it like she did today. This slave had messed up big time and she made sure he learned his lesson by crushing him with them. 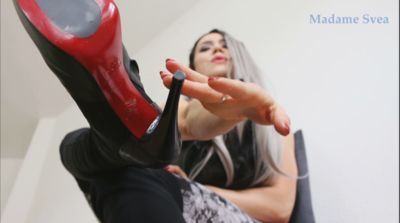 Mistresses force slave to learn to be tidy

Mistress BlackDiamoond wanted to teach this loser how to clean up and how to tidy up her house. She did it by first of all torturing him. She did this using her boots. She also called her friend lady Chanel and both of them had a great time torturing him and kicking him as hard as they could. They forced him to endure the pain and promised him a worse punishment if he did not change his ways.

Princess Serena proves a point to her slave

Princess Serena wanted to demonstrate how her slave's mouth smelled. She made sure her socks were smelly and once she was satisfied that they were stinking, she made her slave lick and smell her socks. He could not believe how smelly they were yet she was an extremely clean mistress. He was even more surprised when she told him that was how his mouth smelled. She told him to improve his hygiene if he did not want problems with her.

Mistresses humiliate guy for refusing to offer his services

These mistresses wanted the services of this guy and he had the nerve to refuse to offer them his services. The mistresses were prepared to offer him a good amount of money for his trouble but he declined. They would not take no for an answer so they punished him and humiliated him for it. The mistresses forced him to lick their boots while he was naked. They made him offer his services for free.